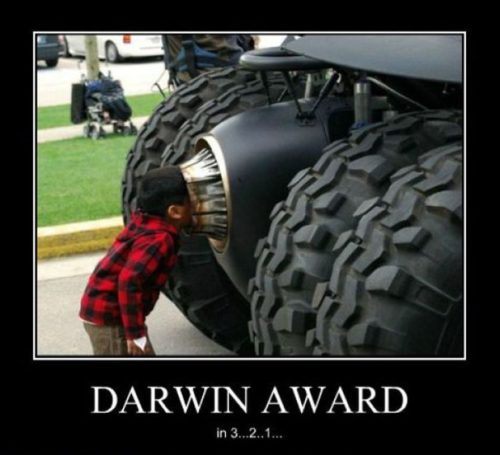 Between work and family commitments, Nick & I do a LOT of driving. So, like anyone that frequents the Southern Motorway on a regular basis, we’ve had our fair share of close calls. After one such occurrence last week our 10 year old exclaimed “They should have a prize for crazy idiots like that!” I agreed and added that such an award existed. It was called the Darwin Awards, held annually in commemoration of those who lack the most basic survival instincts and whose actions have thankfully now taken them out of the gene pool.

But while we all laugh at accounts of ticket machine abuse, concrete mixer misuse, accidental steam cooking and geyser riding, this kind of thing has affected our society in ways that perhaps were not so predictable a few decades ago. Consequentially however, we are now all paying for it.

You’ll see it in your own industry. We see it all over ours. It’s easy to think that instead of Common Sense guiding planning and action, the Health & Safety laws have stolen the essence of Natural Selection. But even common sense and Nature, have their limits.

We are often asked why we must have some of our safety measures in place as they can add big costs to build budgets! But in our trade, there are dangers around every right angle and on every rooftop. We work with multiple trades on a daily basis as we build. While we train well, only use subtrades we trust, and we plan around hazardous job tasks meticulously, we all need protecting from random events that just happen, or that one random ‘idiot’ you didn’t even know you’d need to anticipate for.

We are tasked as to why seemingly simple elements your home cost so much, but our role is for your home to comply and to last long, long after you’ve moved into it. Council set their bar at “100 year storm” possibilities – which sounds like another crazy side affect of Darwinian caution, but are they that uncommon anymore? There is always an element of “what if. “

We don’t ask doctors to operate in disheveled theatres with improper safety precautions for the patient’s safety as well as their own. Building homes is the same. So Darwin aside, support your tradies by encouraging good safety measures and job practices.  After all, some corners aren’t worth cutting.